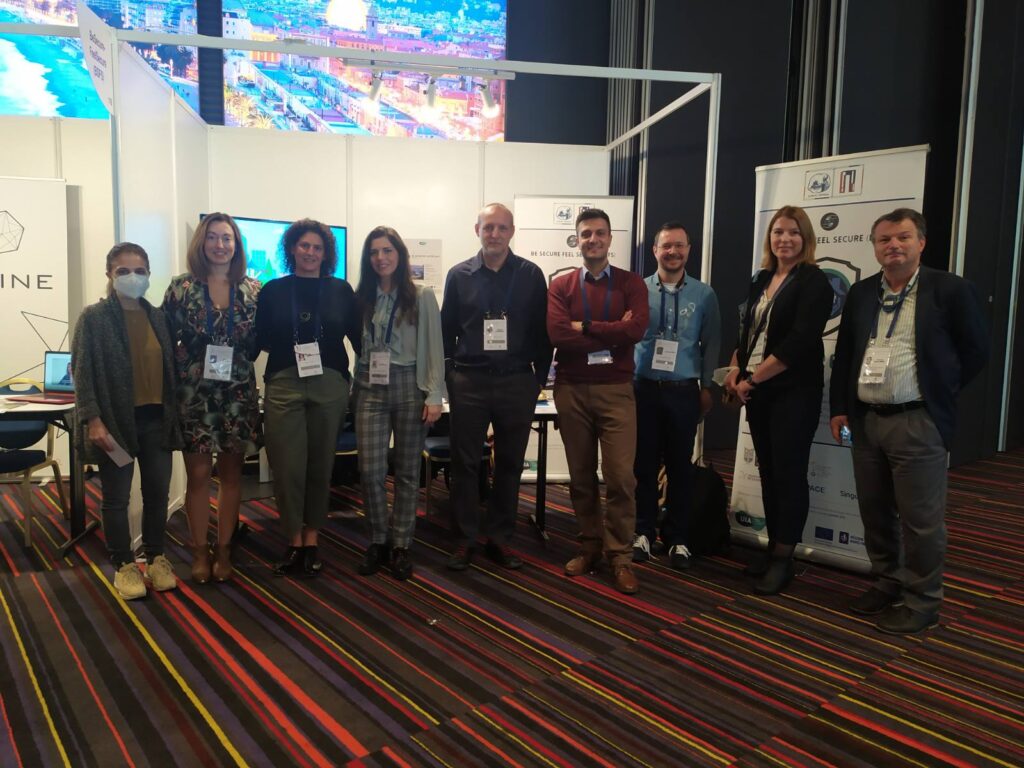 On 20, 21 and 22 October 2021, the BeSecure-FeelSecure (BSFS) project participated in the annual international conference “Security, Democracy & Cities 2021” in Nice, France. The conference, which brought together more than 700 participants from 26 countries and 140 cities, was organized by the BSFS project partner “European Forum for Urban Security – Efus“.

During the three-day conference, the project partners along with the BSFS UIA Expert had the opportunity to connect with a wide and active audience and converse on issues of crime prevention, social cohesion, participation and other urban security topics and to also interact with the BSFS stand visitors.

The project partners highlighted the innovation of the project through a series of presentations, sessions and speeches.

More specifically, on October 20th, the consortium participated in a working session with the other two Urban Innovative Actions (UIA) European projects on Urban Security (SURE, Finland & To-Nite, Italy).

The meeting was attended by representatives of the European Commission who were briefed on the progress of the projects.

On October 21st, associate professor Angelos Mimis from the Laboratory of Urban Criminology of Panteion University participated in the panel of speakers of the workshop: “Know your problem to solve your problem: innovative tools and methods to address urban security challenges” where he presented the statistical analysis of the diagnostic victimization and safety research based on the data received by the citizens of Piraeus.

The BSFS technical manager Mr. Marios Zacharias from Space Hellas presented the “Collaborative Urban Risk Management – CURiM” methodology for the collection and analysis of crime-related data stressing out among others:

“Collaborative urban risk management is enabled with the use of the CURiM platform for the urban authority and with the CURiM mobile app for the citizens. The platform helps the urban authority operators gain information from heterogeneous sources and perform customized urban security analyses. On the other hand, the mobile app enables the citizens to create ad-hoc social networks in Piraeus where they can share their security perception and actively collaborate in terms of urban security at neighborhood level”.

The BSFS project was presented at the parallel session “EU funding opportunities for local & regional authorities” as a best practice case study, where its innovative character was highlighted as it lies in a holistic approach providing a framework that focuses on both crime prevention and the improvement of the actual and perceived security.

During the day, the project partners visited the Centre for Urban Supervision (CSU) in the city of Nice (Video Surveillance Systems) and the shelter for victims “Maison pour l’Accueil des Victimes”

On the last day of the conference, the Deputy Mayor of the Municipal Police and chairwoman of the Local Council for Crime Prevention (LCCP) of the Municipality of Piraeus, Mrs. Kyriaki Bourdakou, represented the city of Piraeus at the workshop “The challenge of promoting safe & sustainable urban tourism”.

The Deputy Mayor had also the opportunity to talk on the side of the conference with the Vice President of the European Commission for the Promotion of the European Way of life Mr. Margaritis Schoinas.

Elected officials and representatives of organizations from France, Greece, Portugal and Spain shared their expertise and discussed the European policies on tourism safety.

The Deputy Mayor, as one of the key speakers of the panel, stressed among others:

“Piraeus is one of the largest cities in Greece with significant traffic in terms of trade and tourism. Thus, urban security has become one of the priorities of the municipal authority. A touristic city, regardless of its size or type of tourism, must consider security as a major concern in its development strategy.

Thus, we must link sustainable & responsible tourism to ensure the security of tourists and citizens. The reputation of the city for both locals and visitors is of a great importance. A safe city for citizens is also a safe destination for tourists.

The context in which we must immerse ourselves is the creation of a brand city, a city where sustainable tourism development and economically sustainable tourism go beyond the traditional forms of leisure travel and aim at promoting and highlighting the cultural elements and the common values ​​of the place.

Local authorities are the fundamental factor in ensuring the safety of both citizens and visitors. That is why we should rise to the challenge by utilizing not only central funding but also EU funding opportunities.”