The BeSecure-FeelSecure project on improving security in the Greek city of Piraeus at the Security, Democracy and Cities conference 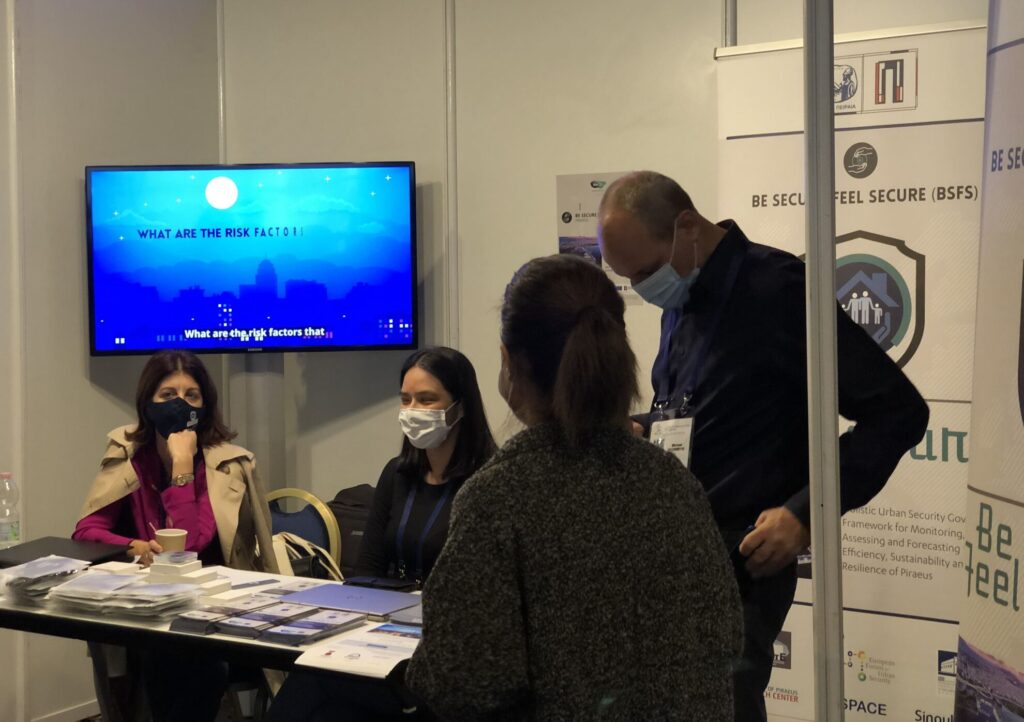 Nice, France, October 2021 – The BeSecure-FeelSecure (BSFS) European project, which seeks to improve security in the city of Piraeus (Greece) and in which Efus is a partner, was strongly represented at Efus’ Security, Democracy and Cities (SDC) conference in Nice (20-22 October).

Financed under the EU’s Urban Innovative Actions (UIA) initiative, BeSecure-FeelSecure aims to develop tools and strategies to be used both in the physical and cyber space to reinforce urban security in Piraeus, which leads the project. As a partner, Efus is in charge of transferability, dissemination and the sharing of experience and expertise.

This innovative project  presented its work in a thematic workshop as well as during a ‘Focus’ session and on an exhibition stand. Furthermore, as a side event of the conference, it organised a meeting with fellow Urban Innovative Actions security projects and with a representative of the European Commission.

BSFS organised a work lunch with fellow UIA security projects ToNite, led by the City of Turin (Italy), and SURE, led by the City of Tampere (Finland), as well as  a representative of the Directorate General Home Affairs (HOME) of the European Commission. Michael Bourmpos, BSFS Manager & Head of the IT department of the Municipality of Piraeus, explained that “the project aims to improve urban security in Piraeus by developing integrated tools and strategies to link local authorities, urban stakeholders and citizens. Our innovations are based on three pillars: governance, ICT tools, and spatial and social interventions.” The concrete actions carried out under these three pillars can provide examples of practices and lessons learned for peer projects and cities and nourish further similar exchanges.

The BSFS project also capitalised on the SDC conference to present its methodology and innovative tools, notably for the evaluation of citizens’ feelings of insecurity. During the workshop Know your problem to solve your problem: innovative tools and methods to address urban security challenges, Angelos Mimis,  Associate Professor at the University of Panteion, said that the project had carried out two surveys, one among the permanent residents of the municipality and the other with local shop owners in order to capture perceptions of safety and fear of crime, based on a priorly set list of indicators.

Furthermore, BSFS presented its  Collaborative Urban Risk Management (CURiM) tool during a ‘Focus’ session. Marios Zacharias, BSFS partner and Senior R&D Project Manager at Space Hellas, explained that “collaborative urban risk management is enabled with the use of [two complementary tools:] the CURiM platform for the local authority and the CURiM mobile app for the citizens. The platform helps urban authority operators to collect information from heterogeneous sources and perform customised urban security analyses. As to the mobile app, it enables citizens to create ad-hoc social networks in Piraeus where they can share their security perception [fears, problems] and actively collaborate in terms of urban security at neighbourhood level.”

Links with the topic of security and tourism

One area in which the holistic approach and innovative practices promoted by BSFS can be particularly useful is tourism, a key sector for Piraeus. As such, Deputy Mayor Kyriaki Bourdakou, who chairs the Local Council for Crime Prevention established under BSFS, participated in the workshop on The challenge of promoting safe and sustainable urban tourism.  “Piraeus is one of the largest cities in Greece with significant traffic in terms of trade and tourism,” she said. “We must link sustainable and responsible tourism to ensure the security of both tourists and residents. I thus encourage local authorities to seize the opportunity of EU funding in this respect.”

The BSFS project plans to organise two open information days for interested European local authorities and urban security stakeholders in order to share its results and discuss how they can be tailored to other cities’ needs. 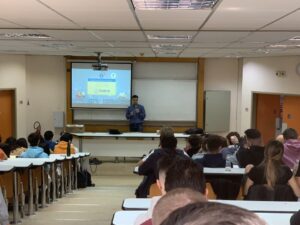