The Launch Event of the European Project BeSecure-FeelSecure (BSFS), led by the Municipality of Piraeus, took place on Wednesday, July 15, 2020, on the main stage of the Municipal Theater of Piraeus in the presence of esteemed guests.

The Be Secure – Feel Secure Project (BSFS) is 80% funded by the European Regional Development Fund through the Urban Innovative Actions (UIA) Initiative and its main objective is to provide a holistic Governance framework in order to reinforce urban security and to promote positive perception of urban safety in physical-and-cyber space.

The event was divided in 3 thematic sections:

The event started with a welcome speech by Piraeus Deputy Mayor of Communication – Promotion, Media, Utilization of European & National Resources, Mrs. Andriana Zarakeli who spoke about the importance of projects that enhance urban security and the faith the Municipality has on BSFS.

Mrs. Zarakeli pointed out in her speech that: “The issue of urban security and the successful primary prevention of delinquency cases in local government is a modern common challenge not only for EU countries but for the rest of the world, as well. The project Be Secure – Feel Secure approaches the issue of urban security, in an innovative and modern way. The Municipal Authority is committed to assist essentially in this effort. We wish good luck in the program and we expect the beneficial utilization of the results for the collective good and interest “.

The guests were then greeted by a prerecorded video by Ms. Camille Degryse on behalf of the UIA Initiative.

The partners’ representatives took turns on stage to present the BSFS initiative, its goals and objectives, its methods and the interventions that are being planned as well as the role of its partner in the scope of the project.

The speakers in order of appearance:

Mrs. Edna Peza who is the BSFS UIA expert also furnished us with a prerecorded video on the importance of practicing a modern approach in urban security, which aired in this first part.

After a 20minute break the second part of the event begun with the presentation of the newly formed Local Council for Crime Prevention (LCCP) by Mrs. Kyriaki Bourdakou, Deputy Mayor of Municipal Police and president of the LCCP.

Mrs. Bourdakou stated, among others, that: The LCCP will try to intervene in combating those social factors that lead some of our fellow citizens to delinquency (poverty, misery, bad family and school relationships, unemployment, etc.) and referred to a series of initiatives that will be undertaken by the LCCP“.

Next, Criminology Professor Christina Zarafonitou gave a presentation on the “Current trends in community crime prevention in Greece”.

Brigadier General Mr. Protosilaos Kostazos, spoke about the new challenges in crime prevention and the role of the police and closed the section.

In the third and last part of the conference, representatives from the projects technical partners talked about technology under the prism of Urban Security.

Mr. Spyros Papastergiou and Dimitris Kallergis from the University of Piraeus Research Centre (UPRC) talked about the Methodology and development of the “Collaborative Urban Risk Management Platform” (CURiM)

Mr. Socrates Kostikoglou from Space Hellas, gave his presentation on “Increasing citizens’ sense of security and reducing fear of crime.”

Lastly, Dr. Kostas Davarakis of Singular Logic talked about the “SPIRIT Tools: Developing technologies for prevention, investigation, and mitigation in the context of fight against crime and terrorism”.

After the closure of the event, our guests enjoyed refreshments and delicacies at the 1st floor foyer of the venue. This was a great opportunity to interact and discuss about the project and its prospective.

To ensure the smooth conduction of the event timewise, the organizers instructed an experienced moderator, the journalist at “Kanali Ena 90,4 FM”, Mrs. Konstantina Petousi. 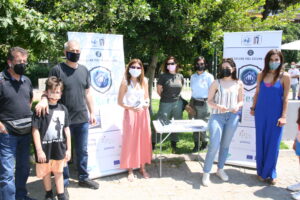 The 3rd BSFS open information day was conducted on the 5th & 6th of June 2021, in the framework of “Imeres Thalassas” of the Municipality of Piraeus. 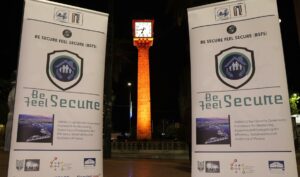 On November 25, 2020, the 2nd BSFS open information day was conducted in the framework of a symbolic social action against domestic violence.